What are the Major Trip Generators and Attractors?

What other Facilities will it Connect to?

What Documents does this fit Under?

The widening of the footpath, to shared path standards, between the Casino and Marieville Esplanade is now complete. Northbound riders not confident enough to continue their journey towards the city by mixing with the traffic on Sandy Bay Road through the shops can switch to the new shared path and connect via Marieville Esplanade to Battery Point.

Stage 3 (the old sections 4 and 5) are being designed.

Works are about to commence on building what is now Stage 2 of the SBR arterial bike network route.  i.e. Marieville Esplanade to Derwentwater Avenue.  Stage 2 is a widened bi-directional shared pathway on the river side of the road, with delineation of the walking and riding sections.  This will enable an easy connection into Marieville Esplanade when this section is built.  The crossover for northbound riders at the southern end will be an irritant and a disincentive to its use.

It is pivotal that the Hobart City Council move promptly and efficiently to bring the originally named Sections 1, 4 and 5 to fruition, as well as, in conjunction with the State Government, the Battery Point Foreshore project to provide an integral connection between the University of Tasmania and Hobart CBD.

What is now referred to as Stage 1 of the SBR arterial bike network route has been completed.  i.e. Derwentwater Avenue to Long Point Rd.  This section comprises painted on-road bikelanes on each side of the road, with a small painted buffer line in places where additional width is available, and highlighted with green paint at commencements and road crossings.

The main concern here is still Cohesion - it is an isolated facility, lacking connectivity with key centres (University, Sandy Bay Commercial Precinct etc.) and other cycling facilities. The lack of connectivity in Hobart's Bicycle Network is a substantial disadvantage and focus needs to be turned to connecting existing links with one another. 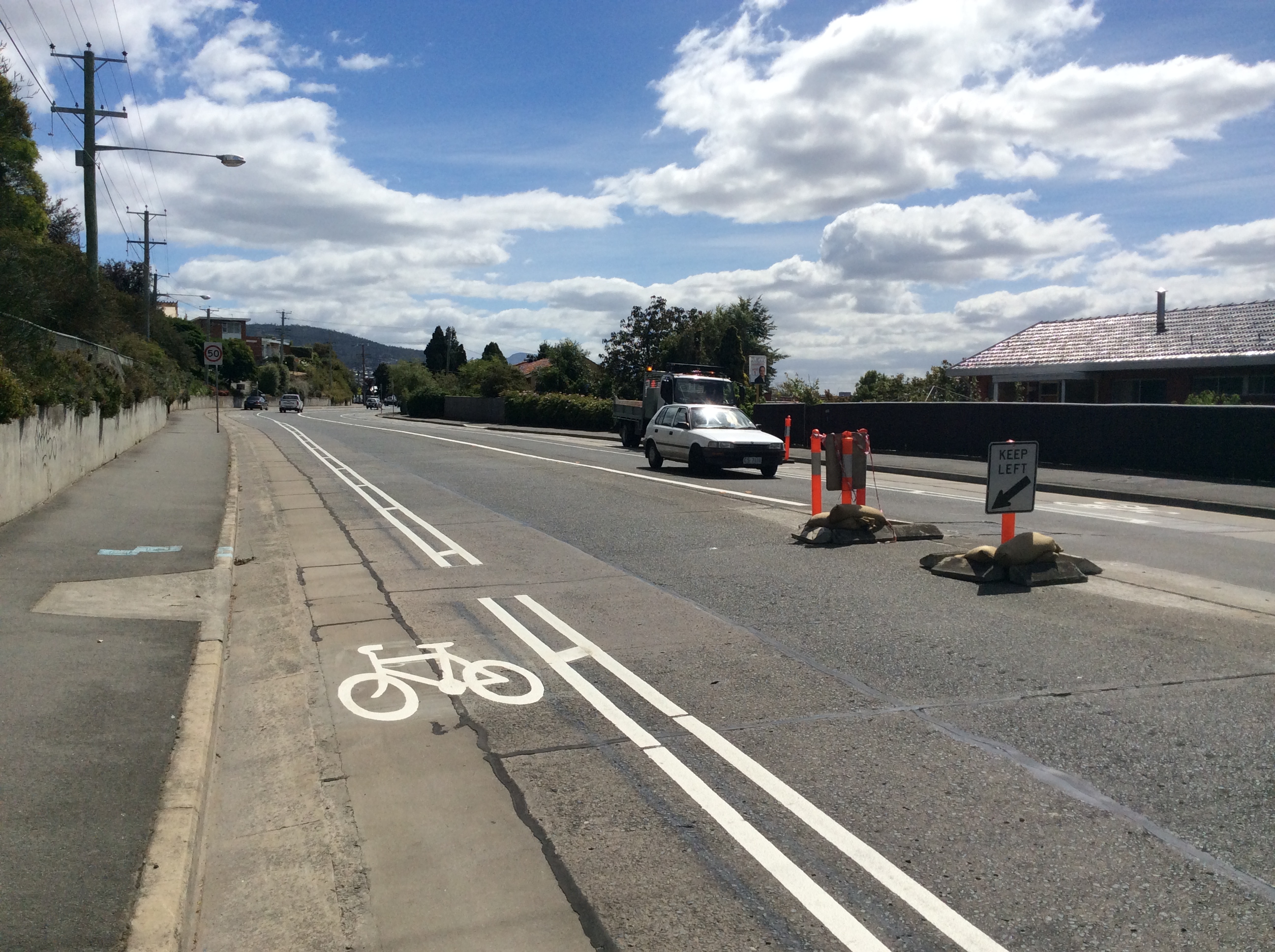 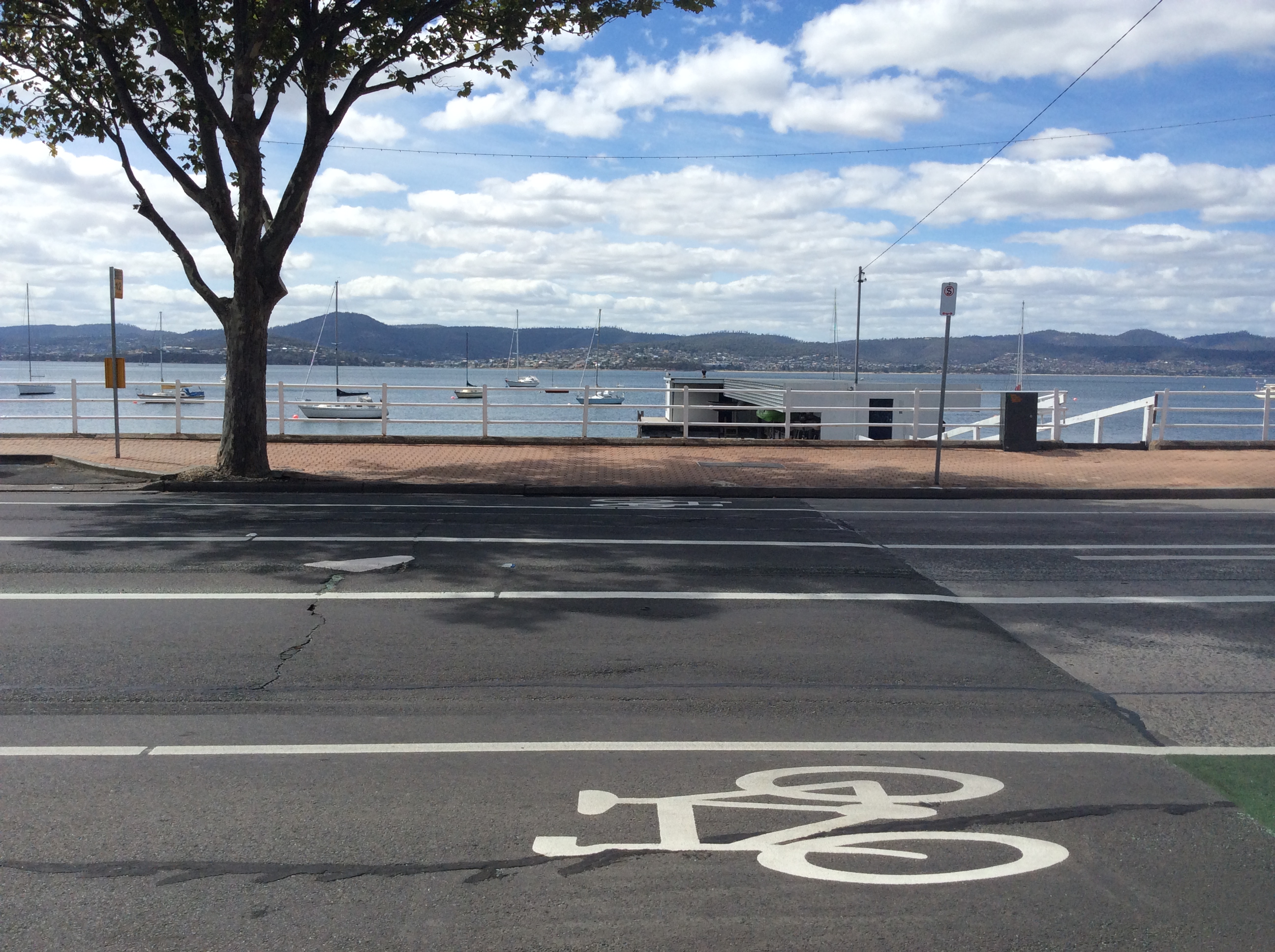 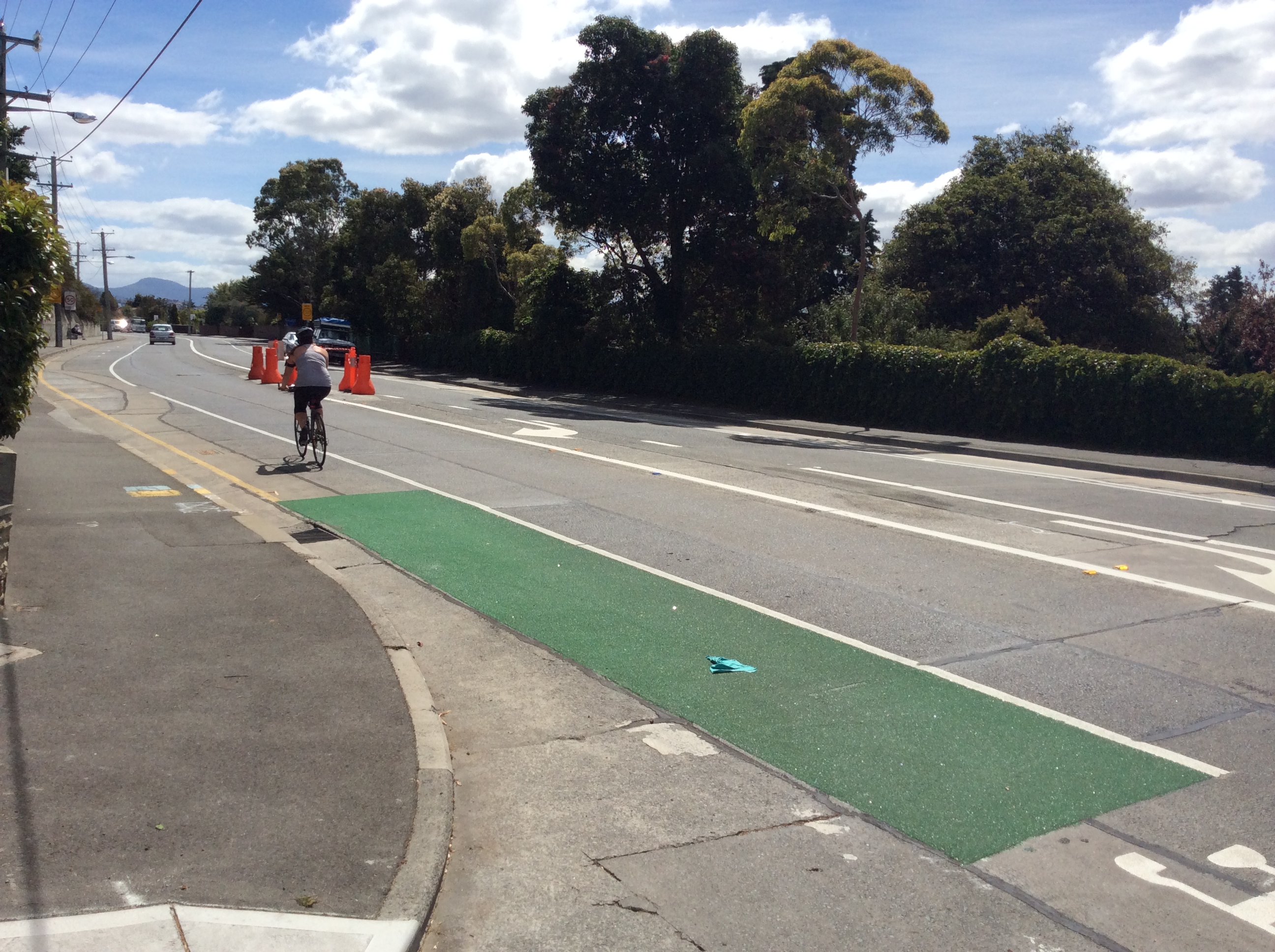 In 2010, the Hobart City Council undertook community engagement for bicycle infrastructure on Sandy Bay Road. The project was subsequently diverged into five sections.

On 11 June 2013, Hobart City Council voted to proceed with construction of on-road bicycle lanes for Section 3 of the Sandy Bay Cycleway, and further designs of Section 4 and 5. This is despite just short of 800 petitions being tabled, calling on the Hobart City Council to preference a separated bi-direction cycleway.

Design:
It has been thew view of Bicycle Tasmania that in opting for on-road bicycle lanes, Hobart has missed the chance of developing a world-class cycling facility with the highest safety standards. However, after lengthy discussions with no end in sight, and broader targets to meet such as the Principal Urban Cycling Network, it was prudent to move forward with a design that could be promptly rolled out.

For the most part, the design of the on-road bicycle lanes is good. Some areas have a buffer zone creating extra distance between traffic and cyclists, and green paint at conflict points further distinguishes the facility.

Mercury: Media launch of the project.

Please check your e-mail for a link to activate your account.
Become a Member Volunteer Find an Event